Here is Callie the Calico Cat’s obituary, written by Travalon and edited by me: 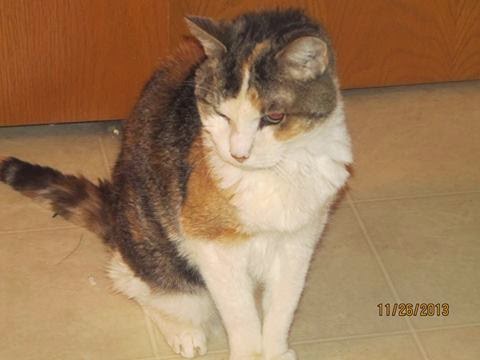 I'm not positive of Callie's actual birthday, although recent vet records list her as being 16 years old. She was acquired while still a very young kitten in 1999 at the Jefferson County Humane Society by my ex-wife as a gift for her young daughter. Callie was left at a motel outside on a leash before ending up at the shelter. Sounds very cruel on someone's part. Right away Callie warmed her way into my heart, as she was cuddly, sweet and affectionate, always wanting to be held and petted, never getting enough attention and affection.

When Rodney the poodle arrived in our household as a young puppy, a lot of attention on Callie was diverted, but she made sure she eventually got her share. She would nudge me with her head to be petted and poke me in the face with her little paw until I gave in. She was welcome in our bed, often purring while walking on top of the covers, knowing she would be petted. I wasn't allowed to get to sleep until I petted her long enough.

Callie was nocturnal and would "meow," waking us up early in the am, sometimes even at 4:30. It was a little annoying but we didn't mind too much out of love for her.

I also remember coming home after some stressful and bad days at work, feeling the need to cuddle with and pet Callie, always feeling better afterwards.

I became Callie's primary owner after my ex-wife and I got divorced; she said the reasons why were because Callie was messy (not consistently using her litter boxes - I was able to get her to improve in that dept. with advice from cat people at an animal shelter I volunteered at) and that she couldn't leave my side, she was just too attached to me to be separated from her daddy. She would meow at me when I came home from an 8-10 hr. workday, wanting attention like she was saying, "Where've you been all day?" I also acquired Rodney a few months later and it felt like I had a little family at home, with my lovable little four-legged furry kids. They were also very entertaining!!

Over the next 5-10 years, I may have given Rodney most of my attention with taking him for long walks and road trips, but Callie was always nice to come home to as well - she seemed to send a message while nudging me to be petted like she was saying " I'm still your loyal, loving kitty - don't forget about me!"

I was away from home on big trips and sometimes young women from the Hartford Vet Clinic would take care of Callie at the condo, and they always mentioned how sweet and wonderful she was. So friendly and well-behaved. Cat-loving women friends who took care of her said, "She's such a sweetie!"

Callie was significantly overweight, probably due to my overfeeding her, and lack of exercise. Kind of "Garfield-like" without the cattitude. In 2013, she lost 3.5 lbs. I thought it was just due to her age, and my feeding her less, but on a vet check-up in spring of 2014, the significant weight loss was addressed and several expensive tests were run. She was finally diagnosed with single cell lymphoma. I think we made the right decision not putting her through any type of chemo; it probably would've been torture for her at her age - a possible prolonged life, but no guaranteed cure.

I'm glad we got two more nights out of her than expected, I liked her rallying - climbing on top of the kitchen counter in the middle of the night, when I expected to see her laying on the couch, barely alive. My family members have always been fighters when facing death. To see her drink some milk and eat a little was encouraging too.

I'm very thankful to Rich for his help with her burial, and the fact that she's put to rest next to your former pets Charlie and Sylvia. It makes it all much more personal.

RIP sweet Callie, you will be in our hearts forever, and you're still at home with us in spirit.

Some fun tidbits about Callie:

-When I went back to college to study hospitality, and tried to study at home, Callie would climb up on the table and put her head right in the middle of my textbook, making a point that paying attention to her should be the priority over any academics.

- Not sure what she thought of Rodney, if she considered him her friend, brother, etc. - but it warmed my heart to see the two of them laying in the sunlight and sitting in my recliner next to each other.

- She was an avid, intense bird watcher through my condo windows; she got very excited and wound up when a noisy flock of geese flew overhead at 4 am.

- She liked to drink out of the toilet, even when she had fresh cold water in a bowl to drink. I thought she was going to fall in sometimes.

- Her favorite spot to say goodbye to me when I left was on the stairwell ledge, hanging there staring at me. "Do you really have to leave me again..?"

- She loved to explore out on the balcony, chasing bugs on a warm summer evening.

- She also loved to climb up on my computer desk when I went online, perching herself right next to the monitor and even sat on the keyboard sometimes (explains the cat hair stuck in-between the keys), again wanting attention over any pursuit I was involved in.

- Of course she loved to sit in closets and drawers, and even in suitcases. When I was packing for a recent trip to NYC, she thought she was going to try to come along and explore the Big Apple with me, etc.

- She engaged in some really fine dining once; I gave her some left over crab-meat.

- My dad visited my condo one day and got a kick out of seeing Rodney as a puppy playing with her.

I met Callie only once, when helping Travalon and Famous Hat move, with Kathbert assisting, a washer/dryer from one of the old places to the new place. Callie was there and was indeed a sweet and friendly cat! It was easy to see why she and Travalon bonded as they did, and why Famous Hat and Callie bonded so quickly.

I should point out that Charlie and Sylvia, buried in my yard, are not my ex-pets, but those of Famous Hat (or, rather, the wearer of Famous Hat).