After some research, I have discovered the Hat family coat of arms and the history behind it. The story begins when Mheadora Ua Thad (pronounced Fedora O’Hat) set sail for France but was captured by Irish pirates, despite the fact that he was an Irish pirate himself on the way to raid some French castle. He escaped to Scotland, an untamed land full of thistles and Picts, and settled in a place between the River Doo and the River Wop, in an area known as the Doowop. Then he lit a fire on top of a hill, and the Picts tried to put it out, but they were held back by the hand of God. To celebrate, Mheadora Ua Thad drank so much whiskey that when he looked in the mirror, he saw three of himself looking back. That is why the Hat family coat of arms features three hats.

To further complicate the story, some Hats eventually migrated back to Ireland (and some went to France, Mheadora Ua Thad’s original destination, where they are today known as Chapeaus), and they converted back to the ancestral religion of Catholicism. Today there are many Hats in this country from Scotland who are rich Protestants. I am no relation to them, so quit asking if you can borrow money. I don’t have any of that Hat fortune. My kin are all poor Irish Catholic hats, just like Mheadora Ua Thad, and we don’t have any money but we have plenty of rosaries, so I would be happy to pray for you. Or at least tip my Hat to you! 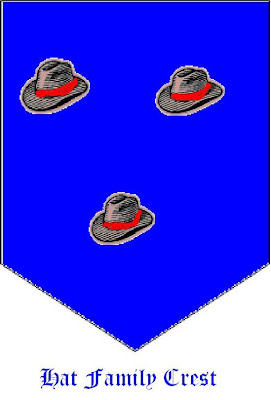