As promised, here are some more pictures of Pineapple Easter Island Head with only its eyes left. It is still pretty cute. I told Toque McToque that I was having pineapple smoothies every day and hopefully I wouldn't OD on pineapple, and she said she didn't think that was possible. She said, "If you drop dead, it would be for some other reason." However, after several days of this pineapple-intensive diet, I started to get a really bad stomach ache and wondered if my peptic ulcer wasn't totally healed and I had really aggravated it with all that pineapple. Wouldn't that be a wacky death certificate: "Cause of death: perforated ulcer caused by pineapple overdose." However, I found some leftover medication, so it's all good, and none of Pineapple Easter Island Head went to waste. 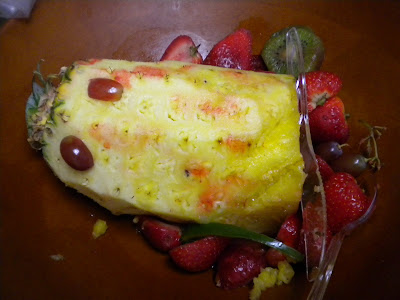