The other day I saw a billboard advertising hospice care, with a serious-looking middle-aged woman pondering the idea. On the other half of the billboard was an ad for vodka with a young, scantily clad woman on it who resembled Lady Gaga. The worst part of all is that both ads had the same lime green color for their background, so that it really looked like there was a connection between serious end-of-life issues and heavy drinking.

Last week as I was walking down the hall, a guy in his early twenties was walking the other direction. In one hand he grasped a bottle of cola, which did not strike me as odd. However, in the other hand he was holding a gallon of skim milk. Milk and cola? Skim milk and cola??? Richard Bonomo would insist that skim “milk” is not really milk, so for his sake let me put it this way: chalk water and cola?

Yesterday I went to a choir party for my OTHER choir, and I had promised to bring a palm tree to the potluck (since I had no idea what to bring), and then when other people looked at the list and asked about it, I had to follow through. I took the top and the skin off a pineapple and pinned some fronds made of green construction paper onto it. Somehow during the course of the evening, my pineapple palm tree morphed into an Easter Island head. I was hoping to have a photo to show you (hint, hint, Banjo Player) but have yet to receive it, so you will have to console yourself with a photo from the weekend before. Warning: it’s disgusting. 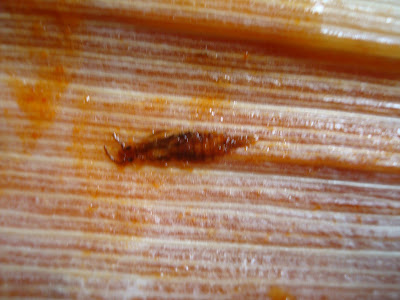 Eat what you get and don't have a fit,
Even if there's a bug in it!
-- Rockstar Tailor